Top 12 Things to Do in Seoul, South Korea with Kids

As we watched the Olympic Games gear up in full swing, we talked about our recent family trip and all the fun things to do in South Korea with kids. It was our first trip to the region and proved to be an amazing destination. We immersed ourselves in culture while exploring ancient palaces in South Korea. We also learned how to make kimchi (a national Korean favorite), embraced a history lesson at the Korea War Museum and ventured into the DMZ (Demilitarized Zone) along the North Korean border. It was a completely fascinating journey, and one I’m grateful for sharing with my kids.

Gyeongbokgung Palace is a must-see for your trip to South Korea. Guests watch the changing of the guard and learn about the South Korean traditional ways of life. School groups are plentiful at the palace, and your kids will be in good company meeting the locals and seeing a new way of life of schoolchildren across the world. 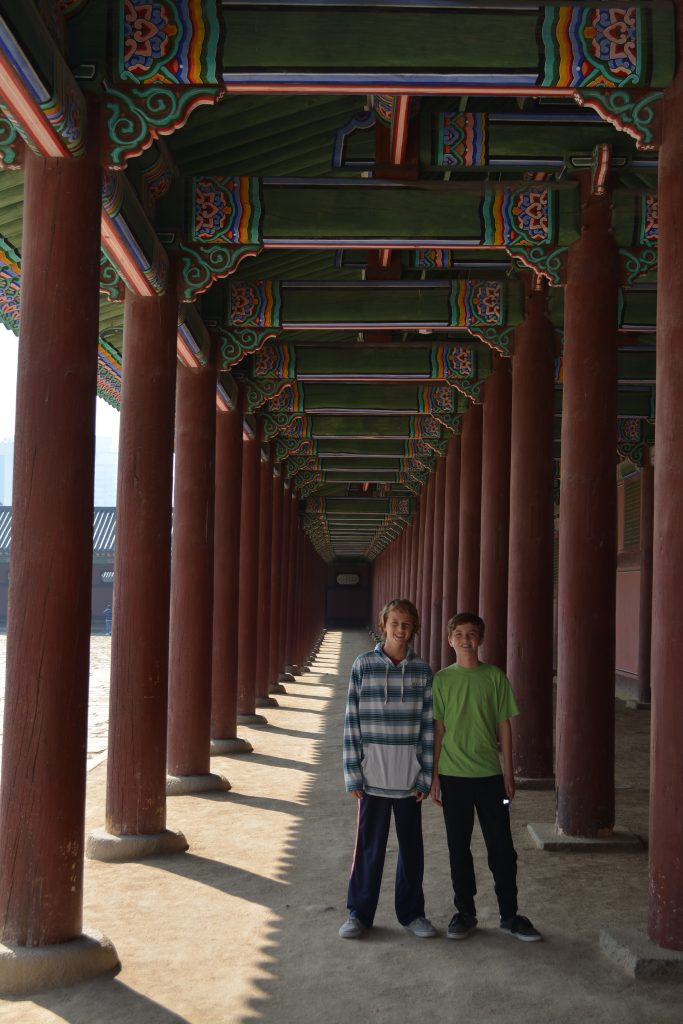 Here are my kids learning about ancient Korean at Gyeongbokgung Palace in Seoul, South Korea. 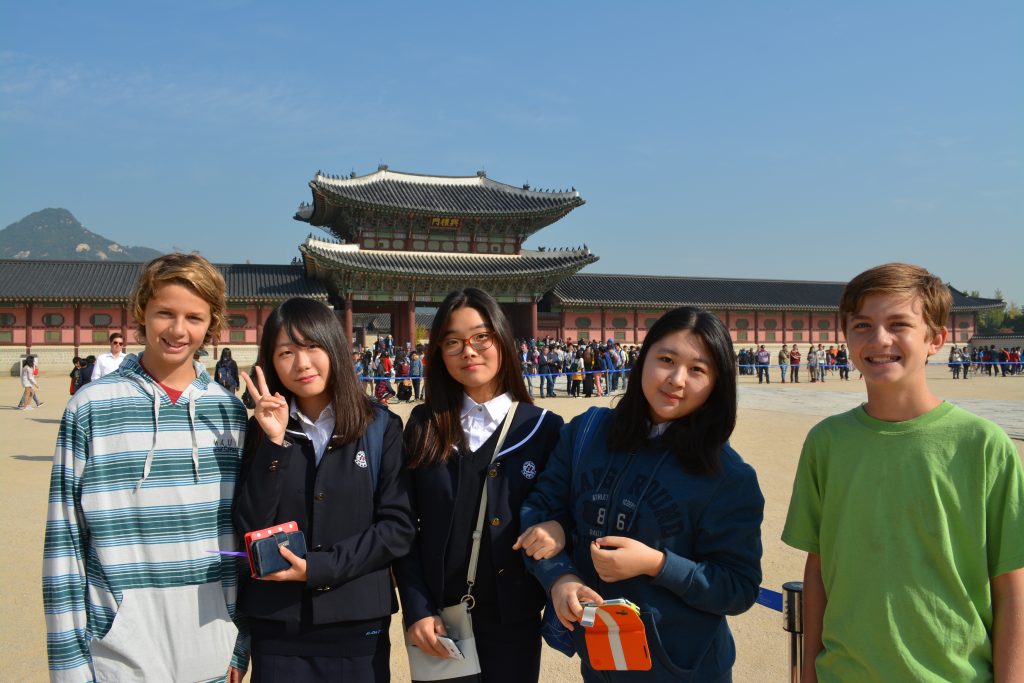 Things to Do in Seoul, South Korea with Kids? Posing with local school kids in Gyeongbokgung Palace in Seoul

2) Things to Do in Seoul, South Korea with Kids? Explore the Insadong Area

After a visit to Gyeongbokgung Palace, head over to the Insadong area in South Korea where ancient architecture houses modern Korean families. The backdrop of modern Seoul looming in the background is stunning and requires several selfie stops. 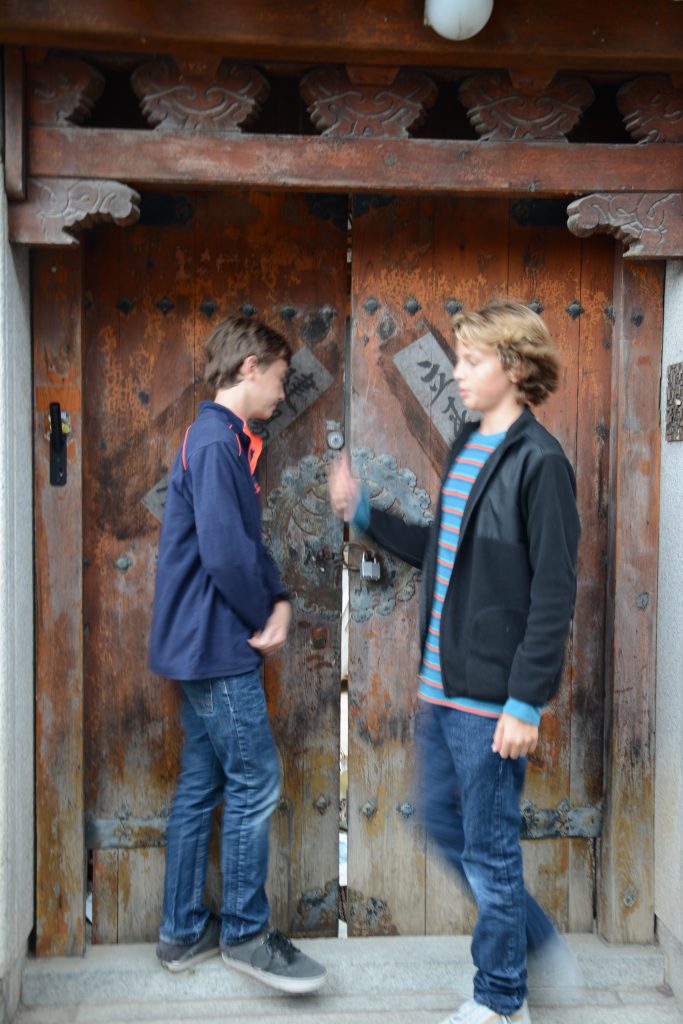 Your kids will love discovering the ancient architecture in Insadong, Seoul, South Korea 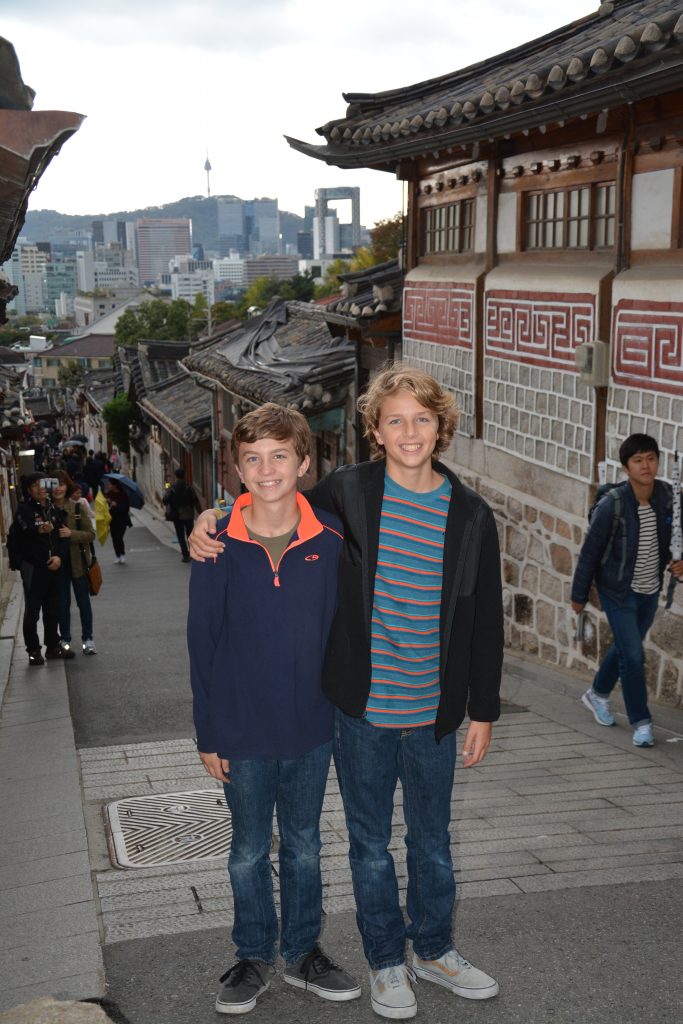 3) Take in the views from N Seoul Tower 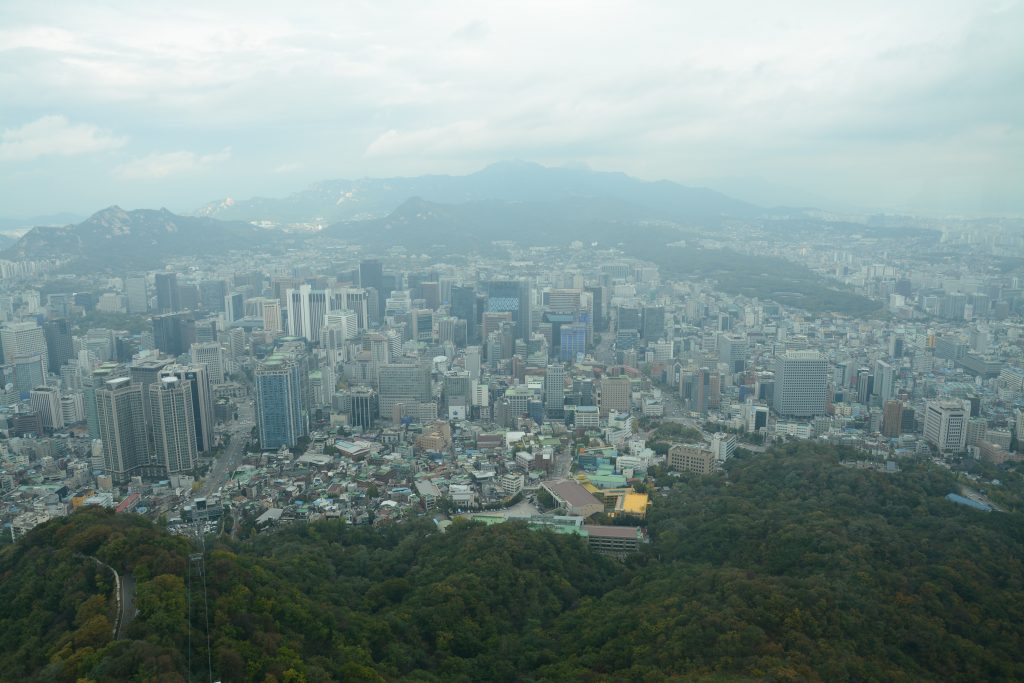 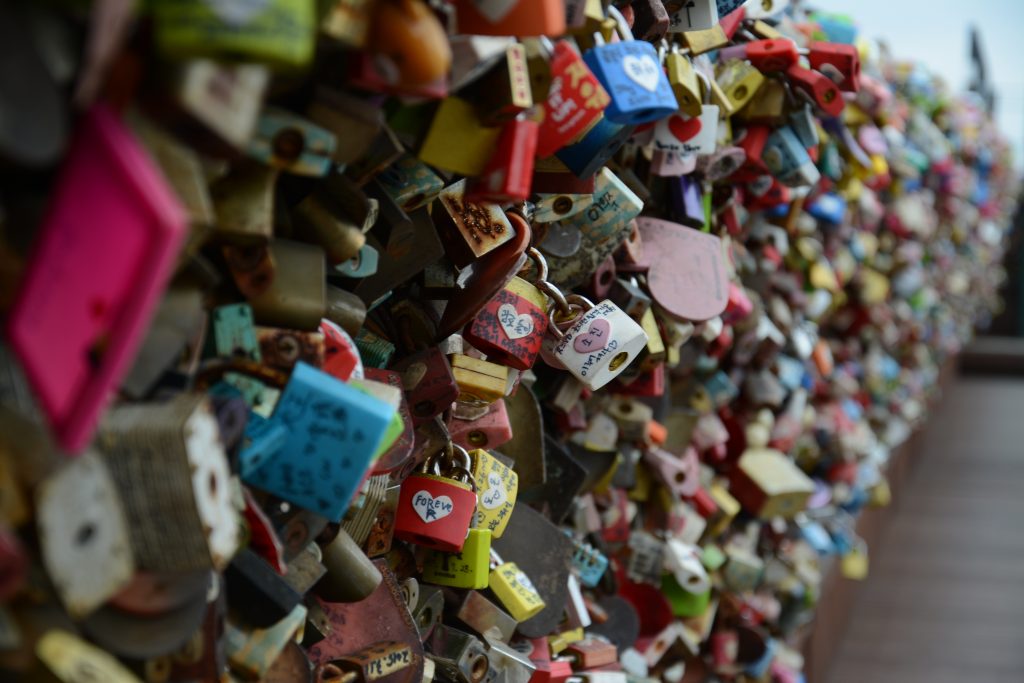 That’s a lot of love! Check out the Love Locks in Seoul Tower

4) Savor the Technology in South Korea

Kids will marvel at modern technology on a family trip to South Korea. And if we’re being honest, parents will too. Technology is infused in everything in Korea from robot greeters at the airport to flushing toilets. It’s a whole new world to explore. But for a real South Korean experience, savor the amazing technologically enhanced performances at the KPOP Experience. The hologram performance by Sy is a crowd-pleaser and keeps kids coming back for more. 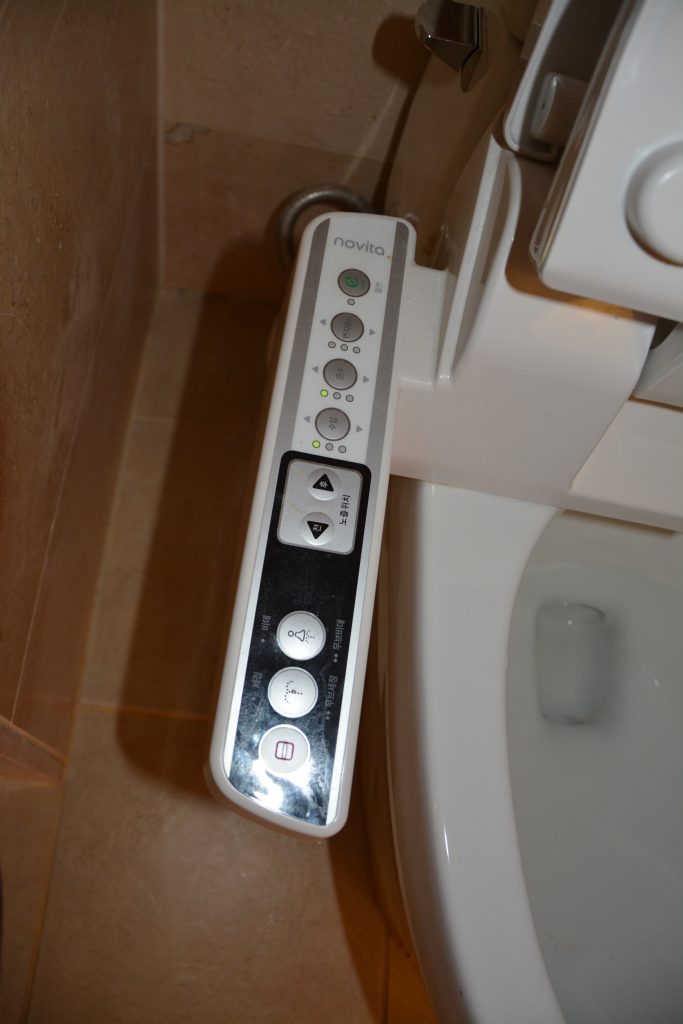 5) Make Some Magic at the Trick Eye Museum

No visit to Seoul, South Korea is complete without a stop at the Trick Eye Museum. This stop ended up being one of our kids’ favorite activities in Seoul, though it’s hard to explain unless you’re there. Mirrors, strange angles, and pure magic seem to turn your kids upside down for a perfect photo opp. We also found the illusions at the museum made for some interesting pictures and social media fodder. 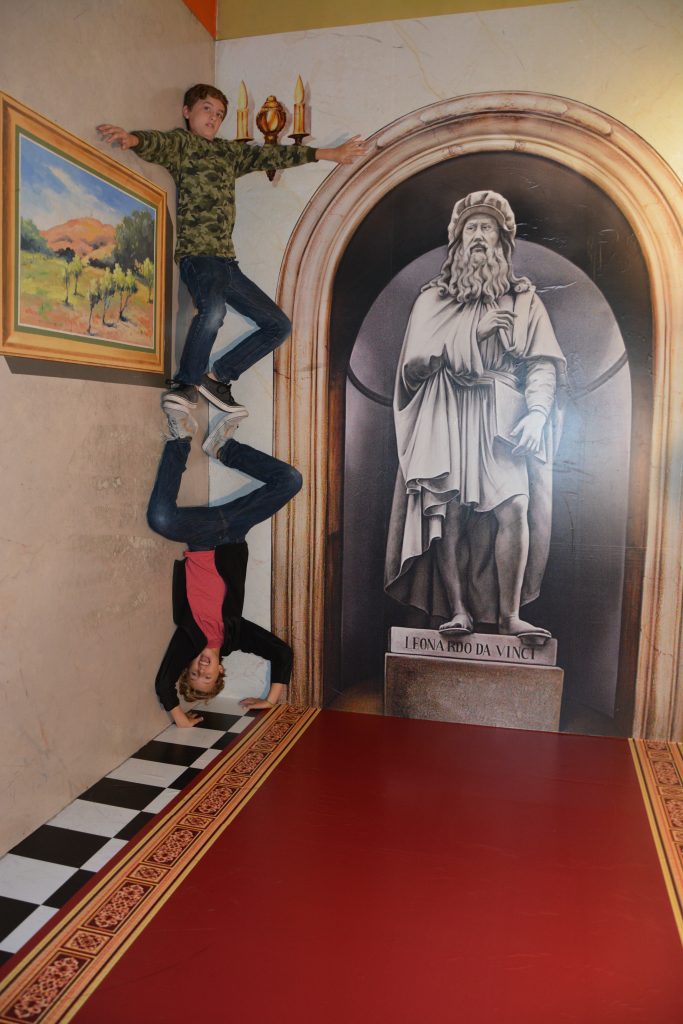 6) Learn the Art of Making Kimchi in South Korea

Korea’s all-time favorite national dish has its own museum: The Kimchi Museum! This specialty museum in Seoul proved to be a fantastic family activity with plenty of time to bond and learn a new skill. You may think your kids would bore from making pickled cabbage with spices and get grossed out by the fish sauce, but it’s a surprisingly fun (and tasty) activity. 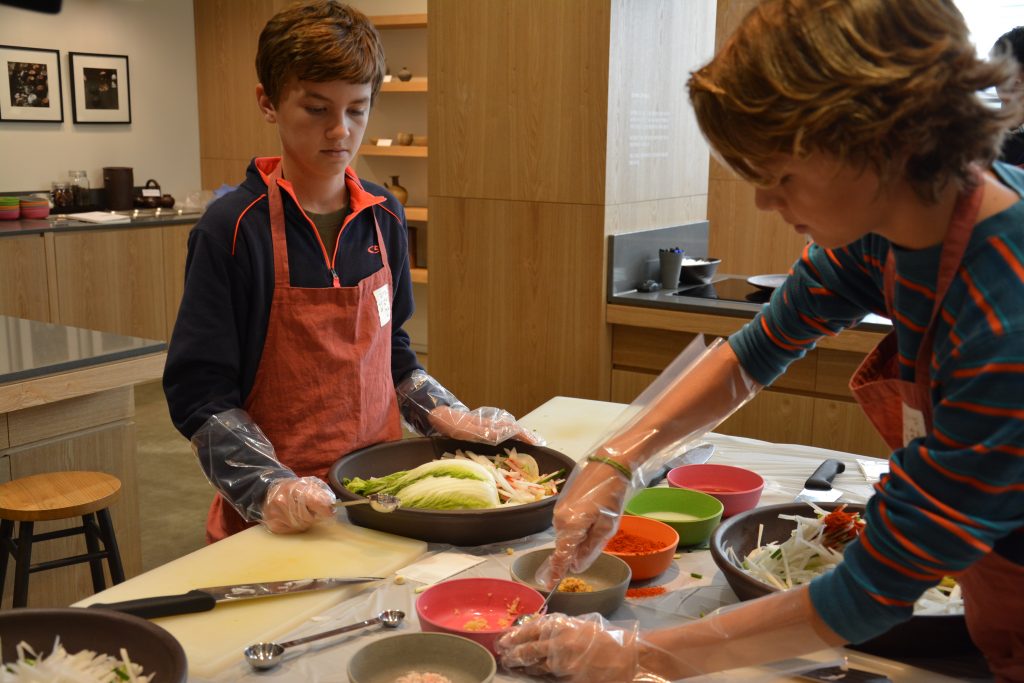 Learn how to make your very own kimchi a the Kimchi Museum in Seoul, South Korea

Get your family’s adrenaline racing at one of the world’s largest indoor theme parks, Lotte World in Seoul. Roller coasters beckon brave thrill seekers looking for an adventAfterwardwards, you can catch your breath with a pop performance, try your skills at ice skating, and take in live entertainment. 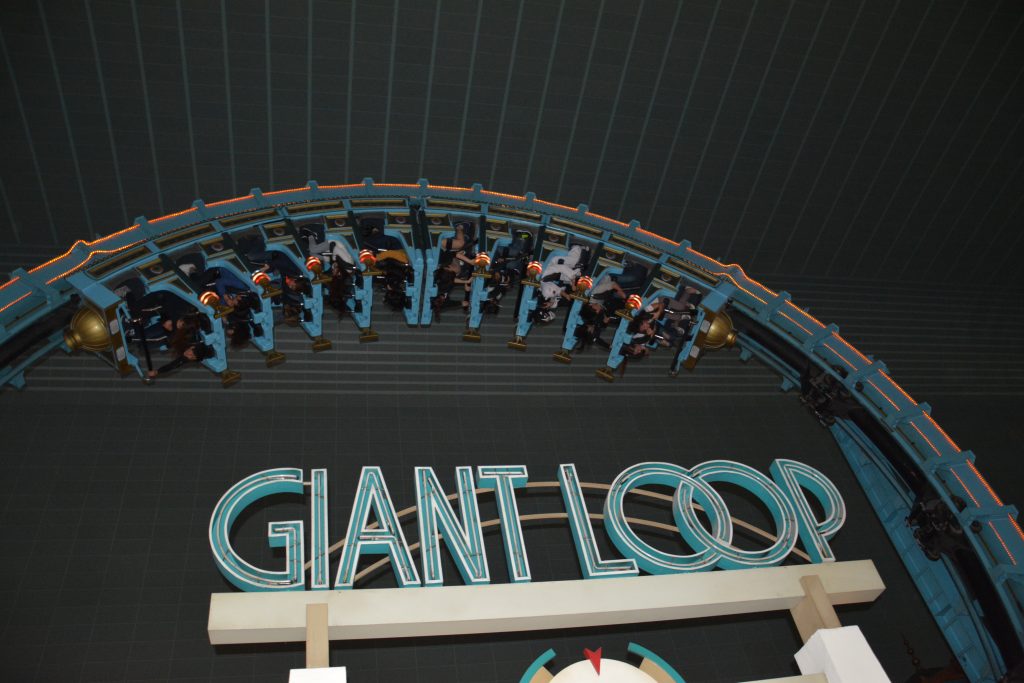 Hitting the rides at Lotte World in Seoul, South Korea

8) Cook Your Own Dinner

South Korea has no shortage of hot pot restaurants where guests cook the food right at their own table. It turns out delicious and fresh and is an engaging activity for kids. Even picky eaters get in on the fun by cooking and then tasting their own food. They’re more likely to try what they’re cooking and realize South Korean food is quite tasty. 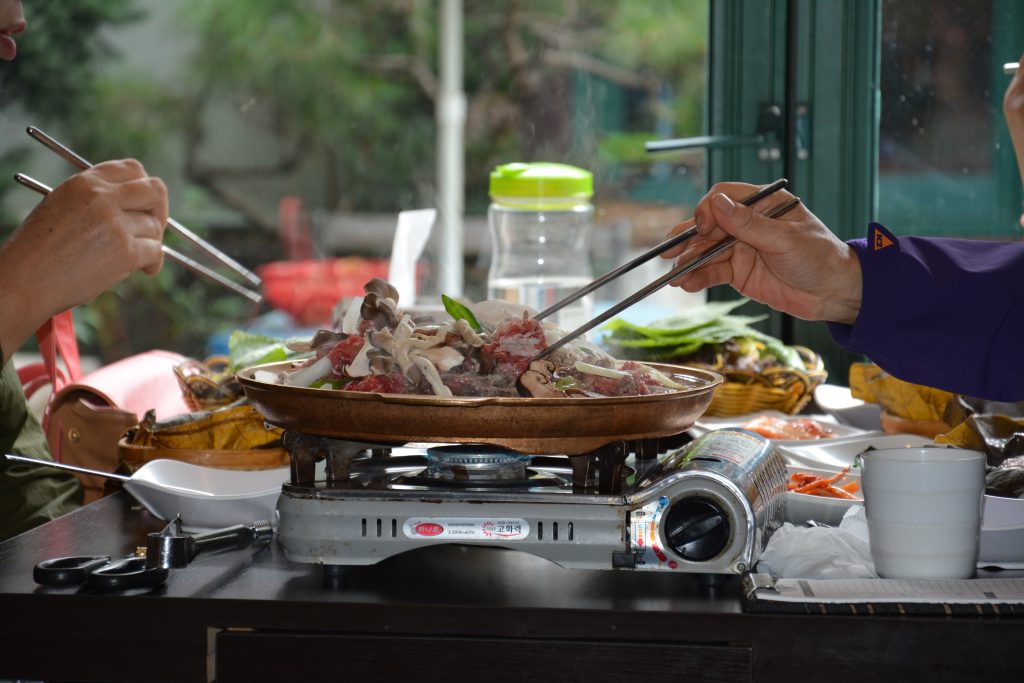 9) Learn About the Korean War and War Memorial of Korea

With the political turmoil in the world today, it’s easy for younger generaitons to forget the events of the Korea War. But the War Memorial of Korea in Seoul gives a sobering overview of the events leading up to the war and afterwards. Kids learn an invaluable history lesson and are totally enthralled by the huge planes and tanks looming outside. 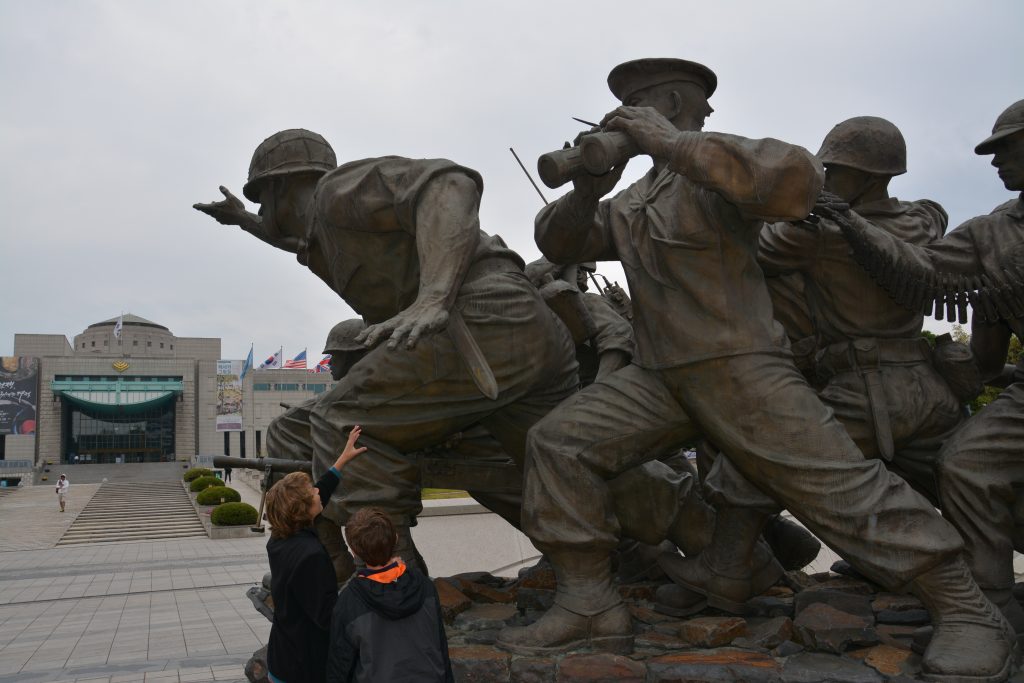 When we visited the DMZ, or the demilitarized zone separating North and South Korea, the kids were completely captivated. They were curious to know all about the face-off between the guards at the South Korean and North Korean border. Situated along the Joint Security Area (JSA), we were humbled by the meeting point of North and South.

We also learned a lot about the peace process during our visit and even got to see the conference room where representatives from the two countries meet with the U.N. This is the spot the two countries meet to discuss any issues. The room is literally half in North Korea and we felt in awe to have technically visited both sides of Korea. There are also a few other places to visit around the DMZ including  walking through tunnels dug under the DMZ and visiting the peace wall near Imjingak. 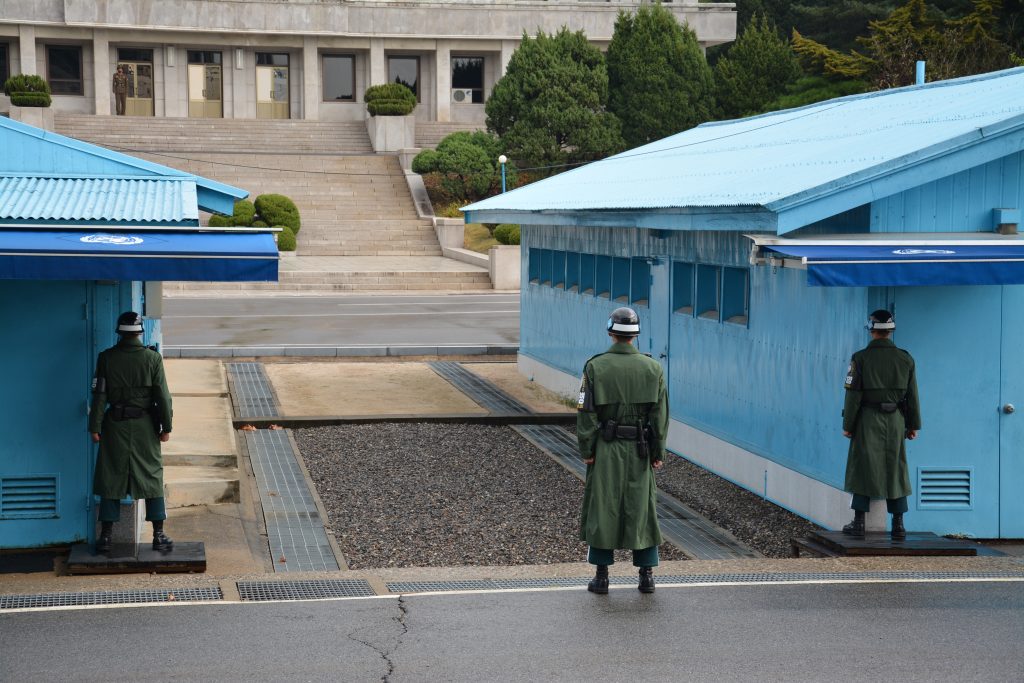 You can watch the face-off happenin gin real-time at the DMZ on the North Korea, South Korea border 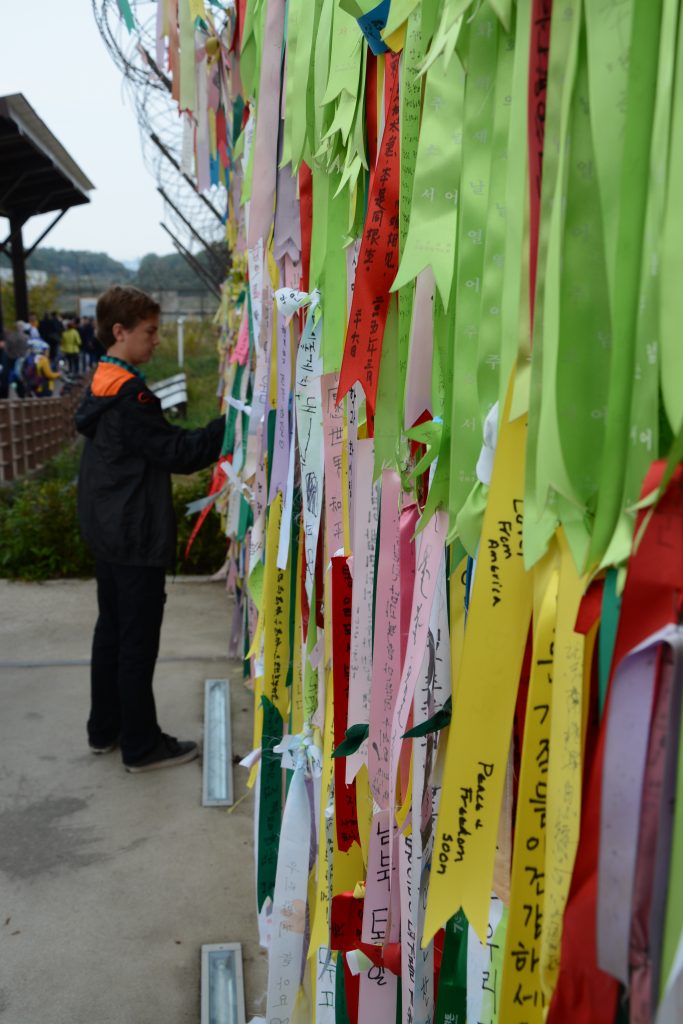 Seamus looking at messages of peace from Korean families who were split up when the countries were divided into two.

South Korea has some interesting place for families to eat, but none are as eccentric as the Cat Cafe. This hot spot in Seoul features furry felines ready to cuddle right up to you while you eat. Seamus loved holding the fluffy pets! Despite being totally enamored with the cats, we decided not to order food. Let’s just say it’s a bit hair in there! 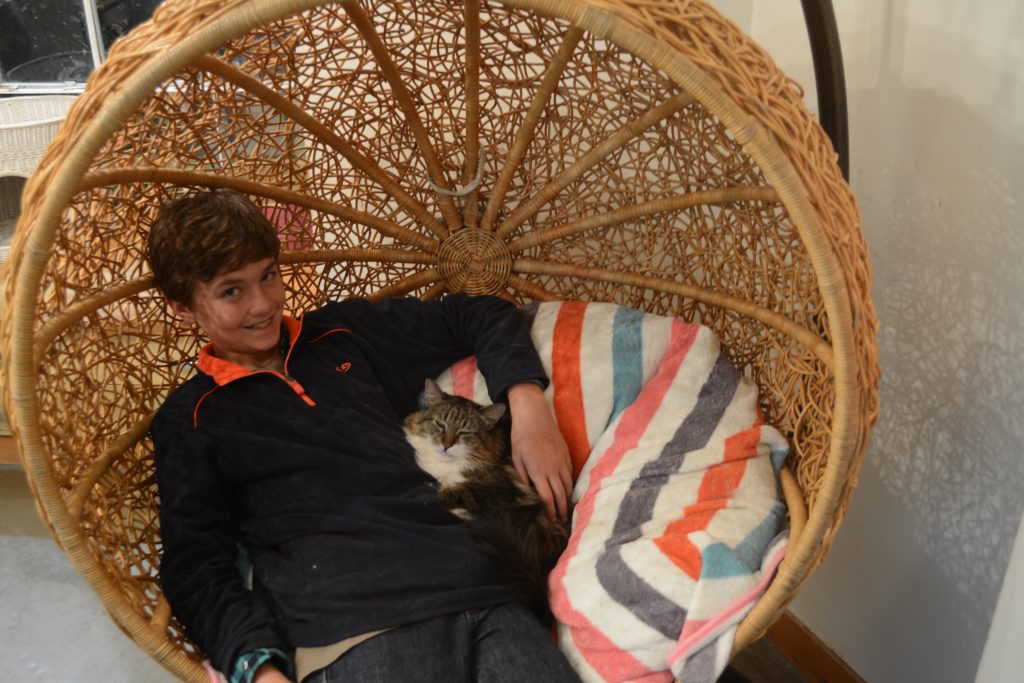 Hanging with friendly felines at the Cat Cafe in Seoul, South Korea

If we could eat our way through South Korea, we would never run out of amazing things to sample. You would be remiss not to scoop up the local fare and delicacies of off street vendors. These traditional markets create mouth-watering dishes for the locals and is a delicious way to really savor the culture. 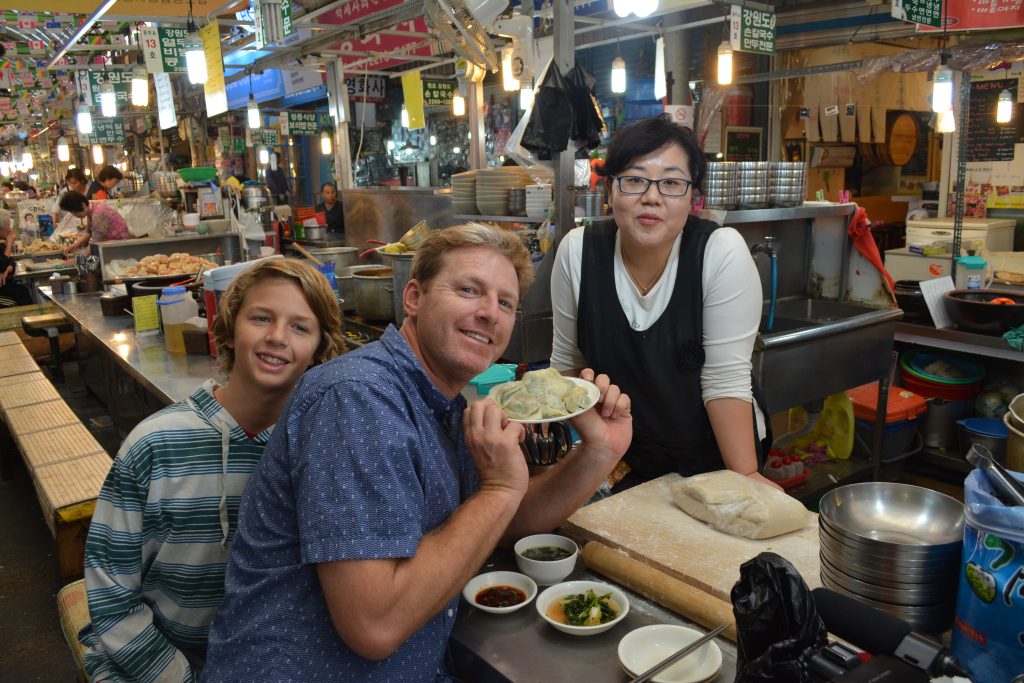 Don’t mind us! We’re just eating with the locals at Kwangjang Market in Seoul, South Korea

That rounds out our list of top things to do with families in Seoul, South Korea. We hope you enjoyed the Olympic Games as much as we did. And now that you know more about South Korea and when you get a chance visit this interesting place with its fascinating blend of ancient culture and modern technology!

Are you interested in getting more tips, itineraries, or ideas for an upcoming trip? We run family travel tours to countries around the world. Come travel with us!